Even years after purchase of the original hook, latch assemblies can be added.S 3322 hooks incorporate markings forged into the product which address two (2) QUIC-CHECK features: Deformation Indicators Two strategically placed marks, one just below the shank or eye and the other on the hook tip, which allows for a QUICK CHECK measurement to determine if the throat opening has changed, thus indicating abuse or overload.

Angle Indicators Indicates the maximum included angle which is allowed between two (2) sling legs in the hook.

These indicators also provide the opportunity to approximate other included angles between two singles.

Other Products in 'CROSBY HOOKS AND SWIVELS' category 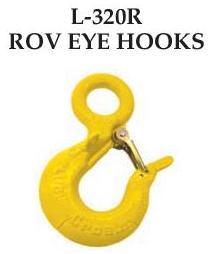